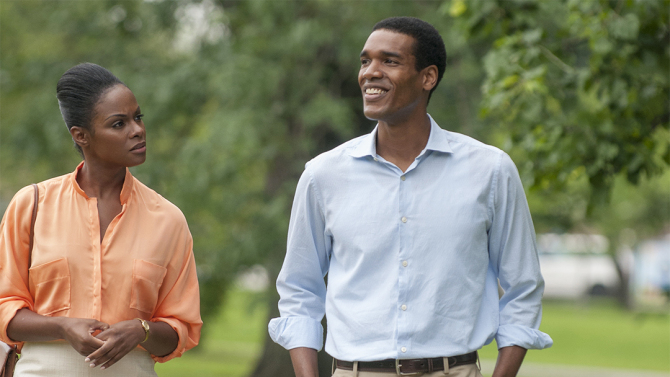 Cinema, and particularly films within the romance genre, thrive off the notion of endless possibilities, the wide-eyed optimism, and infectious energy of youth, where the protagonists have their whole life in front of them, where anything could unfold. Southside With You – in a similar vein to Richard Linklater’s Before Sunrise, revels in this concept, except there’s no mystery attached, as the film comes spiked with a profound sense of comfort that derives from the fact we do know that the future holds for this pair – and needless to say it’s a rather bright one, and not just romantically.

For the two characters being depicted are a certain Barack Obama (Parker Sawyers) and Michelle Robinson (Tika Sumpter) as we witness their first date, as the two colleagues at a law firm spend the day in one another’s company. The latter is adamant this is not a date but merely two friends meeting up, but Barack has other ideas – and with the work commitment not until the evening, they spend this glorious summer afternoon wandering the streets of Chicago’s Southside, as we get a sense for how this first date resulted in a First Lady.

Though undoubtedly a fair amount of artistic licence has evidently been taken to ensure this first date remains ineffably cinematic and engaging – as it’s hard to envisage events occurred just as they are depicted – such is the investment we have in the characters, right from the off-set, and the accomplished manner director Richard Tanne has put this narrative together, it’s immensely easy to just go along with the ride. The director does a fine job humanising both roles, particularly as we only know the Obamas as being the most important couple in the world, forgetting that once Barack was driving a beat-up car, smoking cigarettes and discussing all things Stevie Wonder to impress a date. Just like you or I, and that’s the beauty to this endeavour.

The film works as a catalyst to explore a host of other themes, as the majority of the scenes merely feature the two conversing, discussing feminism, racial politics and everything in between, as we get a real sense for what it was like to be a black woman in the workplace in the 1980s. Black culture is a prevalent topic of discussion, as they attend an art exhibit celebrating it, while talking about oppression, past relationships and family. It’s essential that we see the Obamas celebrate their identity, and particularly at a time when in America relations are strained and we’ve seen a regressive step towards the right, it’s essential we remind ourselves, and celebrate, the history and values of the culture the nation’s most important person belong to.

Both performances are impressive too, and while Sumpter steals the show when handling the emotional core of the piece, Sawyers astounds in a different way, with a quite remarkable impersonation of the man himself. Capturing Barack Obama’s sensibilities and quirks while never feeling imitative or caricature, managing to look and sound like the subject while turning in a solid performance that very much belongs to him. They’re emblematic of a film that carries an indelible charm, enriched by the delightful cinematography and the constant evening glow, making for such a gratifying experience.

So while comparisons are made to the Before trilogy, which is no bad thing, the difference is that after each of Linklater’s films you know you’re going to have to wait nine whole years before finding out what happens to the star-crossed protagonists. In this instance, however, we know before even stepping foot in the cinema. It’s of great commendation to all involved that we’re dealing with a film presented as a ‘will they-won’t they’ where you know fully well they will, and yet it matters little.

Catherine Tate stars in trailer for ‘The Nan Movie’