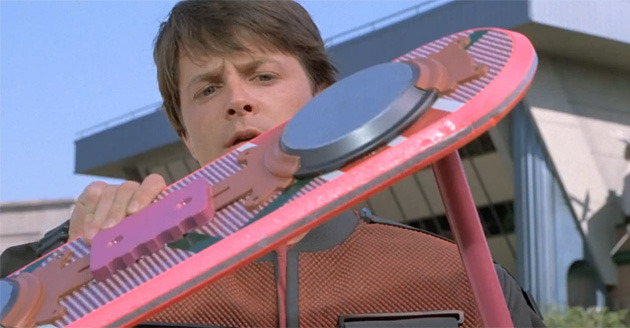 In creating fantasy worlds on the big screen directors have often sought out strange and bizarre inventions to tell their stories. Technology has played a vital role in communicating the future visions of many a filmmaker and thousands of invented oddities are piled high in the collective movie storeroom.

Movie tech can be something as merry as a flying car or it could be a mind-altering machine such as Colin Farrell has himself plugged into in the image above or, taken a little further, a mind-wiping device granting their user that elusive spotless mind.

While you can’t buy any of these particular gadgets this Christmas we thought it harmless to list six of the best (and worst) pieces of movie tech filmmakers have promised us over the years.

This is a neat piece of old school technology which I know does actually exist on certain beachfronts across the pond but I’m sure that none of these have quite the same effect on the unwary patron as the machine in Penny Marshall’s classic film. Turning David Moscow into Tom Hanks and giving the child in us all the chance to live out our penthouse trampoline fantasies is just one reason why we love the film. The White Suit is another. If the wish granting Zoltar did actually exist there’s a fair chance that the world would come to an end pretty soon. However if you want your life changed then toss a penny into the waiting gob of Zoltar and remember – be careful what you wish for.

How Technology Is Changing the Film Industry

Blair Witch, The Magnificent Seven And The World Of Superfluous Remakes