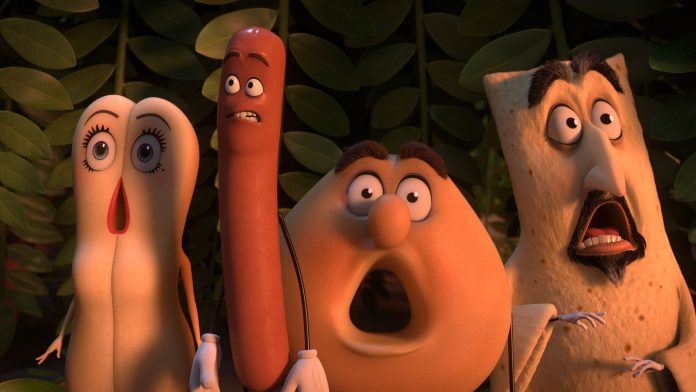 It became patently clear after the very first trailer of Greg Tiernan and Conrad Vernon’s Sausage Party what the paramount gimmick would be to this outrageous animation – to give off the impression we’re dealing with a family flick, only to descend into utter filth and vulgarity, and on that note the picture certainly delivers. But that’s pretty much all it has going for it, and while the humour is offensive and crass, it seems to be all on offer, with an influx of rude jokes that feel as though they’re solely implemented to enforce the film’s prevalent device, without the strength in the narrative to fully sustain a feature length endeavour.

As far as Frank (Seth Rogen), Carl (Jonah Hill) and the fellow sausages that sit on the shelf of a busy American supermarket are concerned, once selected and purchased by a human being (otherwise known as a ‘God) they are then taken to the Great Beyond, fulfilling a life of serenity and sheer joy. Frank is mostly keen to finally make it off the shelf so he can finally nestle into his bun, and girlfriend, Brenda (Kristen Wiig). Finally, with Independence Day approaching, and BBQs on the agenda, the sausages and their respective buns are selected, though when a recently returned Honey Mustard (Danny McBride) claims that the outside world is a dangerous, savage place for food and that the ‘Gods’ murder and eat them, the pair stick around, hoping to find gain some clarity as to their destiny, seeking the advice of Firewater (Bill Hader).

To be offensive in your brand of comedy is perfectly acceptable if, and it’s a rather important if, the jokes are funny. If there is one thing more offensive than an offensive joke, it’s an unfunny one, and Sausage Party too often falls into the latter camp, with one-liners seemingly implemented purely for shock value and little more. Whereas if you take the likes of South Park, and pretty much anything that Sacha Baron Cohen has ever produced, there’s a satirical undercurrent that enriches the material, an intelligence that vindicates the jokes. South Park is an obvious parallel to make given it too is an ‘adult’ animation but any such comparisons are futile and counter-productive, for they seek only in highlighting the flaws to this particular production.

The tie-in with the real world does work in certain moments, and the way the Great Beyond is presented as heaven for the food is funny, for we then have the opportunity to affectionately ridicule the notion of faith and religion and many of the gags derive from that. It’s also humorous in how we use stereotypes based around certain nationalities and cultures through the food depicted, with Sammy Bagel Junior (voiced by Edward Norton lending his indelible vocal talents to the part) equipped with several Woody Allen-inspired one-liners.

Ultimately Sausage Party is a funny concept with a rather flawed execution, and while it’s unlikely you’ll have seen anything quite like it for a good long while, that doesn’t give the film an automatic pass. Regrettably what transpires is a feature short on truly triumphant jokes, and a narrative which loses its way, as tedium kicks in halfway through and suddenly you just end up feeling hungry – which doesn’t exactly help in forming that essential, emotional bond with the protagonists, who all look rather appetising.