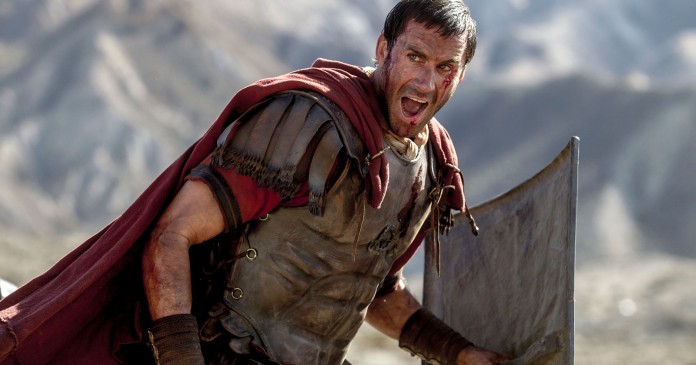 It doesn’t matter if you’re religious or not, what can’t be denied is the sheer wealth and richness to biblical stories. Each complete with an underlying message and value, they thrive in their enormity and distinct pathos – and few are as compelling as that of Jesus Christ (you may have heard of him), particularly the one recounting his supposed resurrection. Yet so few of the Christian scriptures brought to the big screen are done so triumphantly, and regrettably, Kevin Reynolds’ latest endeavour Risen, struggles to buck the trend.

The tale is set in 33 AD, where we delve into the life of an uncompromising Roman Military Tribune named Clavius (Joseph Fiennes), stationed in Judea where he – alongside his loyal aide Lucius (Tom Felton) witness the death of Yeshua (Cliff Curtis). Reports begin to emerge, however, that the body of the deceased has returned after his crucifixion, and it’s down to Clavius to dispel this outlandish rumour of a risen Messiah – and get to the bottom of the mysterious set of affairs. Rejecting any such claim initially, as Clavius digs deeper, he begins to question everything he had once believed.

The film takes a unique angle, and provides the viewer with an intriguing entry point into this tale, as we peer into a well-known set of events from the contrasting perspective of a Roman, and more crucially, a non-believer. Clavius is sceptical at first and needs to be won round, which represents the viewer in many regards, as we enter with caution, much as he does. That being said, it gives the film an agenda of sorts, as given we have embodied this role, as he slowly starts to believe there may be a Messiah, it also requests we too suspend our disbelief and have faith – and the film can become somewhat preachy in that respect.

Risen follows a rather tedious, repetitive narrative structure too, as the following formula plays out; Clavius refuses to believe, then he witnesses something spiritual and so looks pensively into the distance and wonders if there’s something greater at play. Then he thinks no how can it be, then wonders, can it be? This goes on for a long time.

But thankfully the subtle implementation of humour to this accidentally kitsch production ensures there is some entertainment to be had. This is more prominent within the role of Clavius’ commander Pilate (Peter Firth), approaching this as though something of a pantomime villain, in a distinctly, and overtly elaborate display. It adds to the film’s charm however, harking back to grandiose cinema of Hollywood of old, with a certain theatricality that is reminiscent of the likes of Gone With the Wind, Doctor Zhivago and other romanticised blockbusters of that nature.

However for the most part Risen is frustratingly stony-faced, and can be accused of taking itself far too seriously. This is particularly disappointing given there are so many sequences where you can’t help but drift off into the world of Monty Python. Such as when Clavius turns up to a stoning, and you’re half-expecting there to be a crowd of women gathered wearing fake beards and putting on dramatic, deep voices. Instead we opt for a more sincere approach, which is to the film’s detriment.

Win Wings of Eagles on DVD