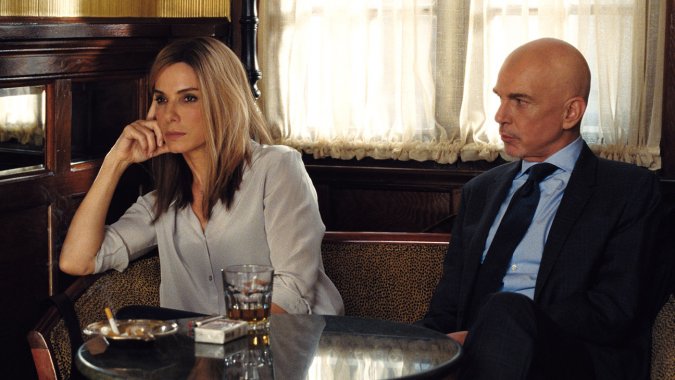 In David Gordon Green’s latest endeavour (and very slight return to the world comedy) – we focus in on a political consultant, employed to strategise a campaign for a Presidential candidate in Bolivia. We don’t ever find out the ethics or principles of the man she’s working for – because who he is, what he believes in and stands for is not the point to this barbed, political satire – it’s her sole job to make him win, and we see this tale through her eyes – and it’s what makes for such an engaging, provocative and pertinent piece of cinema.

Sandra Bullock plays ‘Calamity’ Jane – notorious for her diligence, and her knack for failing, in contentious circumstances. Though retired, and spends her days doing pottery, she is convinced by Ben (Anthony Mackie) and Nell (Ann Dowd) to join them in South America, and help their floundering candidate Castillo (Joaquim de Almeida) come out on top. Though apprehensive at first, Jane is convinced to undertake the project when learning that the current leader of the polls and favourite for the candidacy, is having his campaign run by her bitter rival Pat Candy (Billy Bob Thornton) – and the prospect of finally getting one over her vindictive counterpart allures her. Though with time running out, it’s going to be a much harder task than she had initially envisaged.

Despite not becoming aware of the ideals and proposals made by Castillo, we still root fervently for Jane’s cause. Partly down to the fact Pat Candy is a detestable, pantomime-like villain (a role he tends to play well, even dislikable when portraying Santa) – coupled with the fact we can’t help but root for her, such is the nuanced, empathetic turn from Bullock. We invest in the personalities, not the politics, and it makes us feel cold and hollow for doing so, for caring so much about the face of the campaign, and so little for what’s beneath it.

This is a pertinent, and sadly prevalent, issue within modern politics, and Our Brand is Crisis seeks to remind us of that fact, and make us feel guilty for being a part of that problem, showing how easily susceptible we can be to image and marketing. We find ourselves rooting for a cause and we don’t even know if the Bolivian people – the ones who matter – will actually benefit from it. Jane and Pat Candy are as bad as each other, and you get the impression that had we been following this from the latter’s perspective, we’d be ardently dismissing the former instead.

Green – who came to prominence as a comedic director (Pineapple Express, Your Highness) made a dramatic turn towards drama of late (Joe, Manglehorn) but in this latest production we can see a steady combination and compatible balance between the two. The humour is by no means subtle, there’s a handful of slapstick moments such as when Jane falls over when getting off the plane, but they just work, and if anything, inject a physical farcicality to a film where farce is so prevalent already (it’s a political campaign, after all), so doesn’t feel out of place. Instead it merely heightens the absurdity of it all, if that’s even possible.