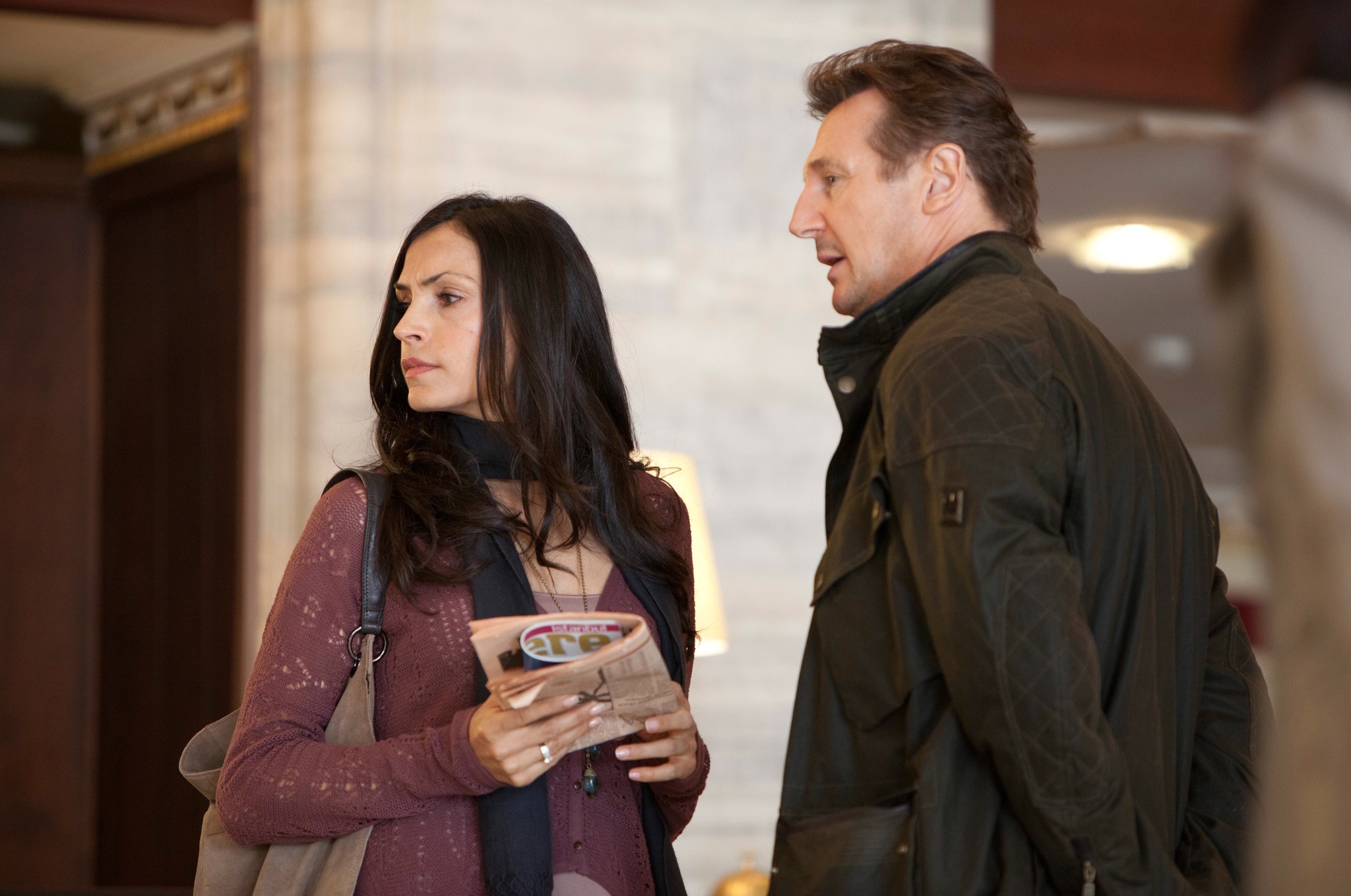 Did you know that yesterday, October 1st, was the International Day of Older Persons? A time to consider the contribution men and woman over 60 make to society and to safeguard them. And what better place was there to look to for cinematic contribution than Hollywood – a glittering platform showcasing the strength, talent and dynamism of mature…men.

[pull_quote_right]Liam Neeson is 62 years old. But that’s nothing in action man years[/pull_quote_right]The first trailer for Tak3n debuted this week and suggests that Liam Neeson’s Bryan Mills is vigorous and vengeful as ever as he sprints towards pensionable age on the run from his latest pursuers. Neeson is 62 years old. But that’s nothing in action man years – Tak3n appears to ape Harrison Ford’s Fugitive and that great man of action is still headlining posters at the age of 72. Famkke Janssen is seemingly sacrificed to the gods of red herring in Taken’s third outing but should she live to tell the tale I have a radical (feminist) suggestion for Tinseltown: If Tak3n is a box office smash please can we let Mr. Neeson get T4ken next time around?

Times they may be a-changin’ but oh my goodness are they changing slowly. In an exciting time for filmmaking when advancing technology is allowing budget-friendly freedom of expression worldwide and creative inspiration is being drawn from sources as diverse as graphic novels and performance art, mainstream film remains stubbornly constrained by the traditions of the past.

Action women over 40 are rare – and over 60 extraordinary – because it is still perceived as distasteful to be less than feminine on film. To write a woman as you write a man is to write about a person entire. To understand, first and foremost, that they are a human being with the same strengths and fallibilities as any other. Hollywood doesn’t – SOCIETY doesn’t – write or see women that way. A woman is defined by her appearance, sexuality, availability, fertility and age. We need only look to Stella McCartney’s comments about “gentle femininity” to see that. In discussing her Paris Fashion Week collection she said:  “Strength on its own in a woman is quite abrasive and not terribly attractive all the time…”

Fashion and cinema aren’t a million miles apart in this belief and it is time to take ownership of the consequences of this trap – when we objectify women we make them excludable and disposable.

Is it a stretch to say that writing a slew of powerful movie women would give real world women their power back? Perhaps. But it sure as hell would give the next generation a healthier window on the world. And every journey begins with a single step.

My suspicion though is that this revolution/evolution will first be televised and that Hollywood will more confidently tread ground that HBO and their ilk have broken. Yet here again we come to a roadblock because even content pioneers HBO worship at the altar of youth.

I held high hopes for season two of True Detective to redress the balance of its splendid but man-centric first outing. However, with an average age under 33, the seven actresses so far rumoured to be in contention are unlikely to push the age/beauty envelope. Had Mireille Enos not already explored similar territory in The Killing she would undoubtedly have made the list and made things a little more interesting but she is still only 39 years old.

What is the worst that could happen if Bryan Mills is bound, gagged and paralysed by an existential crisis while his wife and daughter explore roles broader than appendage/reactionary/rescued for Taken 4?

Or, to take the fight to television: what if the female form is left alive, fully clothed, over forty and unmolested when season two of True Detective premieres? The Wire gave us a credible leading lady detective, lady gangster and lady prosecutor – plus authentic diversity in race, sexuality and age – without sacrificing character. Would it be so impossible to replicate this? To improve upon it, even?

Police procedurals like The Killing and Top of the Lake are driven by strong actresses but are nonetheless drawn on the wearyingly familiar landscape of men killing, oppressing and victimising attractive young women. Stieg Larsson’s Millennium Trilogy gave us a heroine with broader scope yet Lisbeth Salander still rose from the ashes of victimhood and stayed within acceptable parameters of youth and appeal. It’s time to shake things up.

America is occasionally voicing dissent on these tired discrepancies – on screen and off – with Map to the Stars an interesting recent example. In discussion of his role with The Guardian star John Cusack spoke out against the town’s uncomfortable penchant for youth. Cusack himself – though sparing in onscreen appearances – has enjoyed some of the advantages of gender as he achieved and surpassed his middle years on film. His sister Joan, by the frank admission of both, has not been so fortunate.

Unsurprising when a 2014 Hollywood Diversity Report (based on 100 top grossing films of 2013 and sourced via this Helen Lewis piece) reveals a climate in which only 4% of films are directed by woman and a mere quarter feature a female lead. So, if not with television, how shall the revolution begin? Would it be wildly outrageous to introduce a prerequisite that 50% of flagship shows and blockbuster movies be overseen by women? And while we’re reforming let’s get behind the camera and even up the percentages for writers, directors, editors and cinematographers too.

We can always look to books, music and art – to the great feminine talents of past and present – to draw strength and inspiration. But to blast away at Hollywood and Ms. McCartney’s shared tea-dress-trite notion of what femininity means, we need to change the game. And the game will never change while the players remain the same. I began conceiving this piece by writing a list of women over 40 who could lead an action film. It became depressing when I’d typed thirty plus names without pause and felt the sad inevitability of such wasted potential.

We ought to be the villains, masterminds, instigators AND heroes. As men are. Donald Urquhart’s Joan Crawford Alphabet hangs on my bedroom wall to remind me and my little girl every day what magnificent, awful, audacious creatures women can be. Imagine if our children grew up witnessing all that glorious audacity in IMAX 3D.

If knowledge is power they would eventually have the power to change the world.

Interview: Patrick Wilson on The Commuter