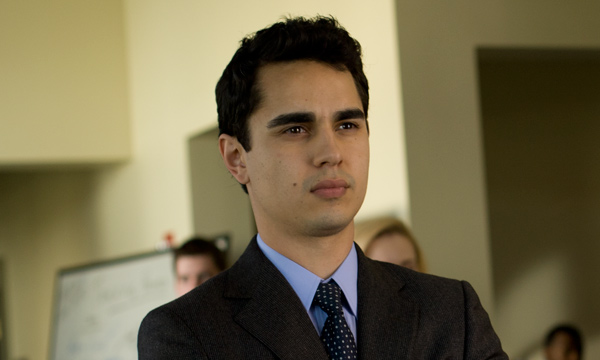 The term ‘passion project’ has become something of a cliched expression, bandied around on a frequent basis within the film industry. But for Max Minghella, who presents his debut screenplay The 9th Life of Louis Drax, it’s a fitting way of describing his very personal relationship with this particular story – as one that once belonged to his father.

Anthony Minghella, the man behind films such as The Talented Mr. Ripley, The English Patient and Truly Madly Deeply, passed away in 2008, but before his death he had been involved, albeit at a very early stage, with adapting Liz Jensen’s eponymous, popular novel, and it’s a journey that has now been completed by Max, who decided to take this on following his father’s death. When asked if he finally feels complete and thrilled he’s been able to see the project through, he admits relief is the paramount reaction.

“The process of making films is such a labouring one and such a time consuming one that by the time you get into production you’re so exhausted by it you’re just waiting for it to be over,” he said. “I started writing this in 2008 and we didn’t shoot until 2014, and by that point I was just yearning for my imagination to get a break from these characters and this world. What I did find magical was is that you get to create these people in your brain, and you create these environments and it’s very childlike that process. Then you show up somewhere and there’s all these grown-ups and they’re building these things you made up and everybody is talking about it very seriously, and actors debating stuff – and that’s a very special feeling made it very much worthwhile for me.”

Within the movie there is a strong father-son dynamic that remains prevalent between the eponymous protagonist, played by newcomer Aiden Longworth, and Breaking Bad’s Aaron Paul. Minghella admitted it was a notion not nearly as prevalent in the original novel, but one he was inclined to bring in himself, given the nature of the film’s history.

“That was a self-discovery through the process for me, and it wasn’t as big an element in the film until quite late. That was tied to my father, I was struggling with the final moments of the film and I realised that the whole process of the movie had in many ways been about trying to say goodbye to my father, so that’s what I wanted the movie to be about too. For all of the objective stuff you have to do as a storyteller, it’s also nice to put something in it that’s really self-expressive, and it felt right to me, given the history of this film and what motivated me to get involved in it from the first place, that the film should carry that theme.”

But when posed with the question as to whether this experience gave him a sense of closure, after a pensive pause, he explained that it hasn’t.

“I don’t think so. It’s like Bruce Wayne killing lots of people to avenge his parents and then not feeling anything afterwards. But I’m really glad I did it. I’d position it slightly different – it’s a blessing that I was led to this process and the trajectory of my life would be quite different had I not become involved in this project, even though I did come to be involved because of a very tragic reason. So that’s been the blessing of it, it’s informed and changed my life in a very positive way and will do going forwards.”

During our interview with Max, in a central London hotel, upon entering he asked if I had wanted anything to drink – a small, seemingly innocuous gesture, but one seldom seen in these situations. Minghella has evidently been brought up well, and that maturity is reflected in this endeavour – as he tells us about his childhood, and how his love affair with cinema initially began.

“My love affair is directly tied to my mother,” he said. “She used to work for the BBFC. She was watching three or four movies a day and she’d come home and my bedtime story would be whatever movie she’d seen that day. I remember her seeing Die Hard for the first time, and Forrest Gump or Tim Burton’s Batman, and these were seminal moments in my childhood, of these films being described to me that I wasn’t allowed to see. It was a very fascinating way of developing a relationship with film because it felt naughty, I wasn’t allowed to see them but here’s what happens – and I used my own imagination to create them. My whole personality is really a result of that very early experience in my life, and that’s very much linked to the process of screenwriting. Especially when you’re adapting something, because it’s the same process – you’re being told a story and then you’re visualising it and reinterpreting it.”

It seemed almost inevitable that he would find his way into film given his upbringing, and Minghella admitted it was the only path he was ever set to take.

“I always wanted to work in film. I’ve done acting which is not something I had ever anticipated, that was the surprise part. I always thought I’d work in film because it’s the only thing I know about. I’m quite a stupid person outside of movies, I don’t really know about anything. I knew I’d be fucked if I didn’t work in film. My parents were actually concerned in my childhood that I didn’t have any other interests and didn’t seem to have any patience for anything else and that’s not gone away, I’m 31 now and that’s not changed – I’m still infatuated and obsessed with this one thing. That’s not something I’m proud of but I don’t have much choice.”

Keeping the project a personal one was evidently important to Minghella, as he explains that he vied to conjure a screenplay for a film he himself would like to see.

“You write what you like and I’m a total sucker for a twist. I really tried to stuff reveals into the film because I enjoy that when I go to the movies. The fastest way to get me to a movie theatre is to tell me there’s a twist in it. For whatever reasons that’s always been exciting to me, mostly because I’m so terrible at cracking them. I fall for everything, I’m quite gullible as an audience member. In a way it’s quite masturbatory, you try and make a movie you’d like to go and see.”

Another personal touch he provided was to ensure that the titular role of Louis Drax was not given simplistic dialogue merely because he’s a child, as Minghella tells us that he wanted the character to have a certain maturity about him – because he himself hated being patronised when younger.

“I’m also very protective of children and of them being talked down to or patronised, as a kid I remember always resenting adults for talking down to me and I still have a chip on my shoulder about it, so I often write about children now being smarter than everyone else, and seeing things that nobody else can see,” he continued. “So Louis is someone I’m very defensive of and I wanted him to be interested in things that are surprising. It’s a small thing, but there’s a moment when he’s talking about Emma Watson as an actress he has a crush on. We don’t often see children talking about stuff like that, so it was really important to me. Certainly when I was nine years old I had a lot of crushes on people and that was a big part of my imagination around that age, the first time you start thinking about that kind of stuff.”

Needless to say we asked who Minghella’s first crush was – though we weren’t quite expecting his response to be so detailed/terrifying/sort of sweet.

“My first crush was Kirstie Alley and I was obsessed with her. I made a package for her which I worked on for a year, and it was a big cardboard box and I would put bits in it every day. I would eat a packet of fruit pastilles and I’d leave the last one and put it in the box for Kirstie, and I sent her this box of rotting food and rejected gifts when I was seven or eight. I think I got a generically signed autograph. I have a feeling that package was never directly delivered to her. That was a big romance for me, albeit very one-sided.”

Moving on swiftly, Minghella went on to tell us that he feels that writers are undervalued, explaining that he even gets more attention for his producer roles than he has for penning this entire script.

“I’m fascinated by how totally disinterested people are in it,” he said. “Nobody cares about the writer at all, it’s amazing. I produced this film as well and there’s a lot more interest in that role than writing it, which is strange for me, because the latter was much more challenging and seemed to take a lot more of my time and effort. I don’t know where it comes from, film has always been considered a director’s medium and I hope that down the line there is more emphasis and celebration of the writing process. When people are able to create original narratives that works and it’s good and we all agree it’s good, it’s strange we can’t applaud that more loudly.”

Minghella is renowned, primarily, for his acting roles in the likes of Social Network and The Ides of March – but admits he still plans on writing, though is sincere and refreshingly honest about his own aptitude for the medium, which just goes to show there’s still a while yet for the 30 year to hone his craft in this particular field. Though needless to say, he certainly has time on his side.

“I’ve already written something else and I’m going to keep doing it,.” before finishing, “I don’t know how much I love the process of writing, it’s very lonely and I’m incredibly slow. To a point where I’m not convinced it’s a natural skill for me, but I’m very happy with Louis Drax and what has come of it, but it took me an unforgivably long time to get the script into a readable state and the screenplays I’ve written since have taken equally as long, so my instinct is that I should find something that comes a bit more naturally to me.”

The 9th Life of Louis Drax is released on September 2nd.