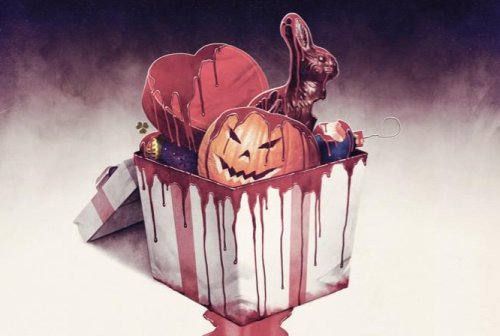 Holidays is an anthology of horror shorts that explore eight different traditional American holidays. Each is around 10 to 15 minutes long, and are arranged in the same order as they appear in the US calendar; Valentine’s Day, St. Patrick’s Day, Easter, Mother’s Day, Father’s Day, Halloween, Christmas and New Year’s Eve.

The filmmakers that contributed the short films include Scott Stewart (Dark Skies), Nicholas McCarthy (The Pact), Kevin Ko?lsch and Dennis Widmyer (Starry Eyes) and perhaps most dubiously, Kevin Smith. If you’ve had the displeasure of seeing Smith’s foray into the world of horror, Tusk, you’ll understand why his segment came sprinkled with trepidation.

As with any anthology of short films, there are peaks and valleys in the quality. Ko?lsch and Widmyer’s Valentine’s Day opens the collection strongly, with decent performances and a coherent story. It’s one of the more formulaic shorts, featuring a bullied teenage girl with a crush on a teacher (but that certainly shouldn’t detract from your enjoyment of it). The other stand-out piece is Adam Egypt Mortimer’s New Year’s Eve, which sees its creepy yellow-toothed antagonist receive his comeuppance after an ill-fated first date. Another worthy mention is Nicholas McCarthy’s bizarre Easter. A masochistic, cross-dimensional, Easter bunny-Jesus hybrid is birthed from a large egg in a family’s living room, understandably terrifying the little girl that lives there. It doesn’t make too much sense, but the sheer absurdity of the situation and the repulsive creature itself make it a lot of fun.

The lowest point is undoubtedly, and unsurprisingly, Smith’s Halloween. He makes the bad, but now sadly expected, choice of casting his daughter Harley Quinn Smith and the creator of YouTube series Epic Meal Time, Harley Morenstein, as the stars of this poorly conceived and badly acted short. It features Morenstein as a grimy ‘cam-girl’ pimp who dupes teens into moving into his house, promising a glamorous lifestyle in the world of ‘risk-free’ adult entertainment. The three frustrated and abused girls that he’s currently employing decide to take their revenge when he tries to rape one of them following a cringe-inducing speech about the strength of their ‘coven’ from HQ Smith. Aside from the less-than-stellar acting, it ultimately fails because the value is placed on being gross and kooky rather than on actually having a compelling and well-rounded story.

To the credit of the filmmakers, the music and special effects are generally well done, and never feel particularly jarring or obtrusive – something which can be a seemingly difficult feat when it comes to horror films. The exploration of each holiday is subversive and compelling, and the directors never go for the obvious – there’s no stalker ex-girlfriend or murderous Santa to be found here. The greeting card style of the title cards is a nice touch too, and you’ll find yourself looking forward to them at the end of each segment. Holidays is certainly not the worst in its genre but the lows unfortunately just outweigh the highs, and it falls short of being a must-see for horror fans.

Holidays is released digitally on We Are Colony on April 15th.