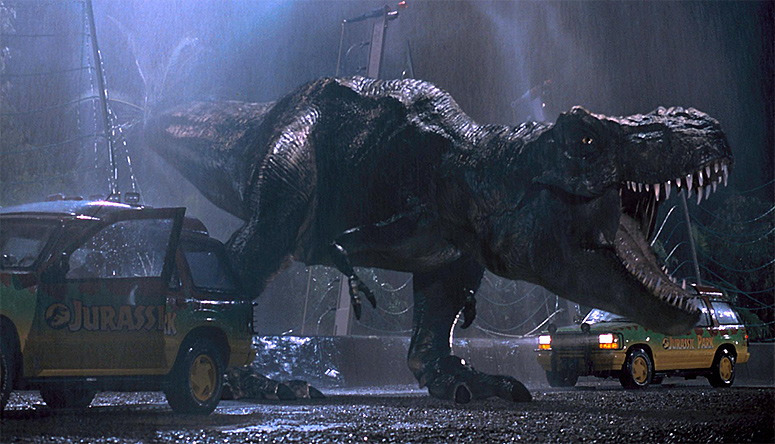 Lending weight to CG characters is about more than just making sure they cast a shadow and are lit property. When something as big as T-Rex plants its foot in the mud, you need to feel the heft. Hard to describe or quantify, but like anything else, you know it when you see it.

The little newborn Godzillas in Emmerich’s monster flick got this all wrong, whereas Spielberg constantly got it right, whether it was dinosaurs or Earth-invading tripods in War of the Worlds. Despite its manifold shortcomings, even JPIII managed to get this element right, the impressively rendered Spinosaurus smashing through sturdy metal fencing with all the oomph and shudder you might hope for.

So, what are the comparable progressions of this important element of CG work? Michael Bay’s Transformers, despite their impressive weight, are all shiny, metallic and angular – nothing like ILM’s scaly reptiles. A better comparison and a laudable piece of progress would be Del Toro’s much-underappreciated Pacific Rim.

Taking the notion of Transformers’ mighty robots and asking, “what if we made them even bigger?” and then coupling them with almost absurdly large inter-dimensional monsters was a great move and although the scale of the fights makes it a little harder to invest in them, the CG work in rendering the creatures deserves a doff of the cap.

Whether fighting out at sea or within some unfortunate city, the CG work employed in Pacific Rim is hugely impressive. We not only see the size of these creatures, we feel their weight as they crash to the ground (or get battered around the head by an adroitly swung tanker).

Consider in contrast how strangely rubbery and weightless the Brontosaurus stampede in King Kong felt, which is all the more frustrating, coming as it did after Peter Jackson and WETA’s sterling CGI work throughout the Lord of the Rings films with cave trolls, Balrog and those weird elephant things.

Exclusive: O’Shea Jackson Jr. and Michael Dougherty on Godzilla: King of the Monsters