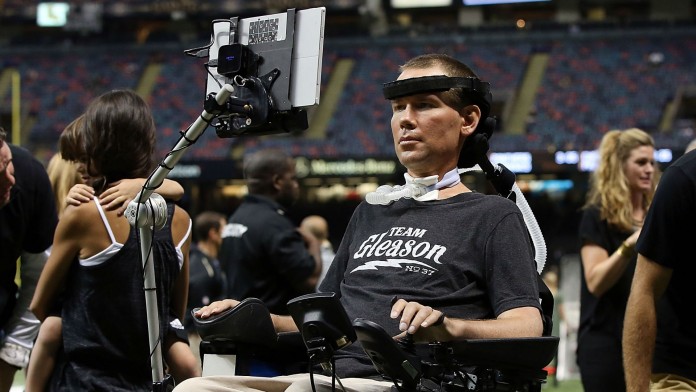 Steve Gleason has always been a hero. At 5 foot 9 he had no business playing football in high school, especially not in college, and no way in he National Football League. But Gleason’s heart got him there. His drive, determination and refusal to be defeated led him to living out his dream and in turn become a hero for the people of New Orleans after the tragic events of Hurricane Katrina.

His football career alone captures the soul of Gleason and would be appropriate for a documentary just on that. But the documentary Gleason is about the next phase in his life Gleason had to endure, a phase where Gleason become much more than a hero. In 2011 Steve Gleason was diagnosed with ALS, a crippling ailment better known as Lou Gehrig’s Disease. This is an incurable, terminal illness where the brain slowly loses the ability to communicate with the body’s muscles. The results are the loss of the ability to walk, use your hands, speak, and eventually the ability to breathe.

Here is a man at his peak physical shape after a nine year career in the NFL suddenly at the mercy of an illness that he can not defeat.  Six weeks after leaning of his diagnosis, the greatest thing to ever happen to him occurred, Gleason and his wife learned they were expecting their first child. While the timing is truly tragic it presents the springboard for this incredible documentary. Gleason began filming a video journal for his unborn son. He wanted his son to see him for who he is not what he would eventually decline to.

The filmmakers got full access to these journals and they are as heartbreaking as one would expect. Here is a Father who wants nothing more than to be there for his son but he knows his disease will eventually prevent him from doing so many things a Father can do, like feeding his child, playing catch or even just hugging him.

The tone of the journals start happy and reflective but start to shift tones to sadness, anger and sorrow. As Gleason’s wife approaches her due date a filmmaking team move into the Gleason’s house to help her take care of Steve and the baby when it arrives. The access they get to their everyday life is stunning as you see arguments, tender moments and private scenes that truly bring you in to their lives.

The relationship between Gleason and his Father is one of the strongest foundations of the film. Gleason struggles with his faith and living up to his Father’s expectations in displaying that faith. Steve chronicles his childhood by expelling how strict and demanding his Father was of him. As Gleason became older his Father became extremely religious in an attempt to reconcile for his past actions. As Steve becomes more sick, his Father begins to push Steve to give himself up to God to heal him. In perhaps the most emotional scene of the documentary Steve stands up for himself and confronts his Father. It is incredibly difficult to watch. Here is this incredibly private, high charged emotional scene between Father and Son. Gleason pushes his Father with the little strength he has left begging his father not to question his faith while his Father breaks down in tears and holds him while telling him how scared he is that he might lose his son.

The tears start there and do not stop. The film also chronicles Gleason’s philanthropic work with his charity group Team Gleason. Gleason assembles a team to provide support and equipment for ALS victims around the world. In fact his advocacy pushes for all ALS victims to have a wheelchair equipped with speaking devices that give a voice to those who have lost theirs.

Gleason is an incredible documentary. The level of access is something unparalleled. It is a tale of survival, kindness, family and the ability to never surrender. The filmmakers have a true love of Steve that shines in every frame. The best thing that could come from this documentary is a better understanding of ALS and the effects it can have on it’s victims and families; even the strongest.