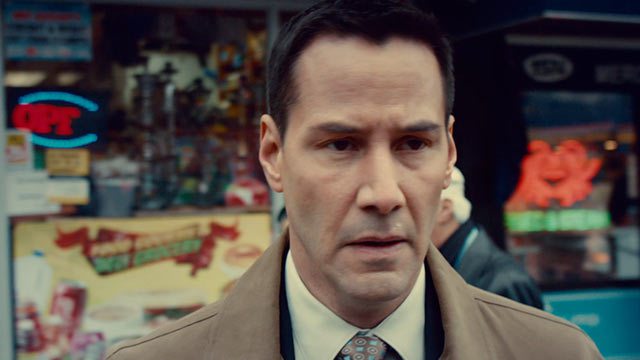 “I’m thinking I’m back” was a gloriously meta line uttered by Keanu Reeves, in the excellent actioner John Wick. There was a hint to this particular piece of dialogue that suggested the actor was making a statement, not only on behalf of the character, but himself. Given how impressive John Wick was, it’s fair to say we believed Reeves when he said it – and therefore it’s hard not to feel disappointed when seeing the actor in the immensely underwhelming thriller Exposed, where he spends the vast majority of his time pulling lots of “I’m a pensive, pissed off cop with things going on in my life” expressions.

Reeves is playing Detective Galban, tasked with finding the killer of one of his close colleagues. The victim was murdered in a subway station late one night – and having close affiliations to the criminal underworld, the corrupt cop was murdered, and so long-term adversary Black (Big Daddy Kane) becomes the prime suspect. But there was somebody in the station that same night, as Isabel (Ana de Armas) was on her way home, but she hadn’t witnessed the attack, preoccupied by another event from that same, fateful night – when she witnessed what she believed to be a ghost, floating in mid-air. While attempting to convince her brother-in-law Rocky (Gabe Vargas) of her spiritual encounter, he himself winds up as a target for Black, having been suspected of being a potential informant to the police.

Though it’s Reeves who comes with the experience, de Armas steals the show as an actress with an incredible degree of graceful, screen presence, as an alluring and enigmatic performer. It helps she’s one of few characters within this picture that isn’t reprehensible, which otherwise makes for a distinctly cold piece of cinema. But that said, it’s unique for a whodunnit crime thriller of this nature to not romanticise over the victim – for the former detective sounds like a nasty piece of work, and we deviate away from any sense of pity, not for him nor his objectionable, bereaved wife.

However it’s merely a unique element in what is otherwise an all too hackneyed endeavour. Director Declan Dale (a pseudonym for another, unnamed director who clearly wanted nothing to do with this picture) seems to drift carelessly away from any sense of simplicity too, with a complex, convoluted narrative that attempts to cover too much ground, balancing a myriad of themes. There’s also the struggle in finding a working balance between the gritty, naturalistic edge, and the surrealistic, fantastical elements – a task that regrettably isn’t accomplished, and as such makes for an underwhelming tired, slice of contemporary cinema.

Bond is back! Here’s the new No Time to Die trailer