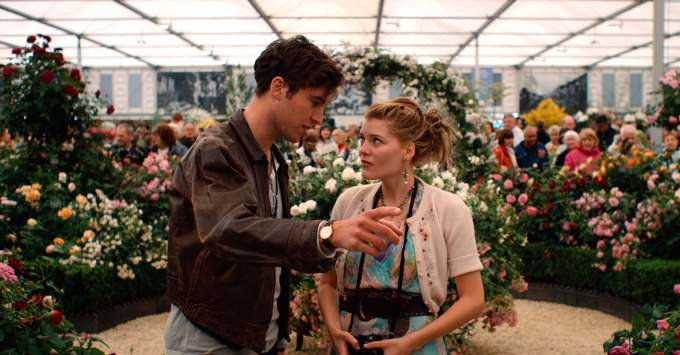 With all due respect to Mary Reynolds, a skilled, diligent and creative landscape gardner who impressed in remarkable fashion in her debut Chelsea Flower Show a number of years ago – questions do remain as to whether her story is one that demands a cinematic retelling. Though you can’t not commend her accomplishments, and her dedication to being a nature activist, without the weight and richness to the narrative, that distracting sense of ‘why is this a movie?’ lingers painfully over Vivienne De Courcy’s debut feature.

Mary Reynolds (Emma Greenwell) was raised humbly in Ireland, with dreams of one day competing in the esteemed Chelsea Flower Show, to showcase her talents as a gardner and prove that you don’t need to have come from a privileged background to be successful in your career. When venturing to Dublin and adjusting to city life, she meets botanist Christy Collard (Tom Hughes) and the pair fall in love, and while she supports his dreams and desires to provide life in Ethiopia, he too is supportive of her ambitions, and she heads to London to win this title, against the odds.

There’s a distinct, indelible Irish charm that remains prevalent throughout this endeavour, as a film that, while undoubtedly flawed, and particularly from a narrative viewpoint, maintains a congenial quality, an enchantment of sorts that adds to the gentle atmosphere. But it spawns a horribly mawkish romantic sub-plot which ticks all of the boxes in the cliched romantic drama, abiding by the tropes to excruciating effect. The lingering stares, the way Hughes squints, it’s just not fun to sit through. Thankfully, however, Greenwell’s endearing demeanour ensures we remain on her side, rooting for Reynolds to come out on top – while the underdog status that exists helps tremendously in that regard.

But there aren’t enough supporting story-lines to work alongside the core tale of competing in the Chelsea Flower Show, which struggles to compel, and will have problems appealing to a mainstream, broad audience, in what is a rather niche area to explore. We simply need more going on as there’s not much else to tell. This is based on a true story after all, and the writers can’t simply make stuff up – though there is an argument to be had that the feature would’ve benefited greatly if they had done.

Win In the Heights on 4K Ultra HD