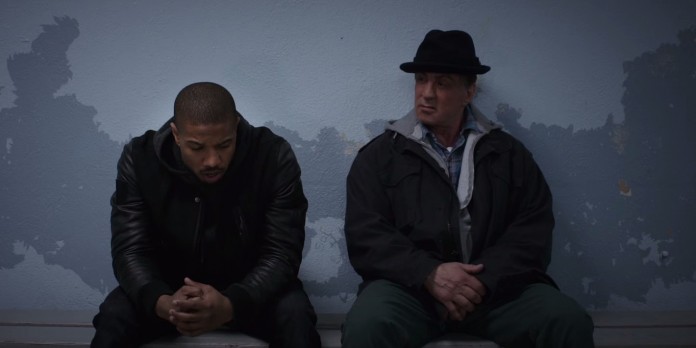 Almost a decade on from Rocky Balboa, Sylvester Stallone revisits his most iconic character. But this isn’t a story of one improbable blood-soaked last round in the ring chasing a final flush of glory – we had Grudge Match for that.

Instead, with everyman slugger Rocky well into his sixties, Creed follows the fortunes of Adonis Johnson (Michael B. Jordan). The illegitimate son of Rocky’s original nemesis Apollo Creed seeks out his father’s old adversary in a bid to fulfill his big fight destiny. What follows avoids the cheesy hype of Rocky 3 and the flawed trainer/pupil dynamic of Rocky 5 and opts instead for gritty rites of passage for Adonis.

We meet a young Adonis in 1998 and learn of his troubled early years in group homes and correctional facilities before being taken in by his stepmother Mary Anne Creed. Flash-forward to the present day and a safe job in finance isn’t cutting it for a young man with anger in his fists. It’s to writer/director Ryan Coogler’s credit that, while we don’t see Jordan throw a punch in anger for almost the first hour of the 130 minute running time, the threads of this underdog tale are compelling enough to keep us hooked even before its seconds out.

And the insistent trumpets of the classic Rocky hook shift from a mournful refrain, when Rocky visits Adrian’s grave, to a punchy training montage as the big fight draws near – and what a fight. Boxing fans will be thrilled to see three real life exponents of the Marquis of Queensberry’s rules providing the edge which Adonis must prove himself by. Andre Ward, Gabriel Rosado and scouse world champ Tony Bellew bring the balletic braun for some brutal fight scenes and it’s to Jordan’s credit that he discovers his own eye of the tiger. It’s a strong performance for the actor too, and despite the debacle that was Fantastic Four, Jordan’s breakthrough “adult” role in Ryan Coogler’s directorial debut Fruitvale Station showcased a screen presence with the intensity and physical smarts to make what is effectively Rocky 7 compulsive viewing.

We watch Adonis’ first fight – with Rocky as his trainer – unfold as if we’re experiencing a tricksy Birdman-style single shot. And a final showdown against ‘Pretty’ Ricky Conlan (Bellew) sees Coogler deliver on the film’s early promise of old school grit without turning into a fairytale. For, as Balboa reminded us in his last big screen outing back in 2006, success in the ring is hard won, “Nobody is gonna hit as hard as life. But it ain’t about how hard you hit it’s about how hard you can get hit and keep moving forward…”. Watching Stallone play the role of kindly Svengali ‘Uncle Rock’ reveals an actor able to shift gears and show a life that has been hit hard. It’s his best performance in years. Though produced by Stallone, if you’d never seen a Rocky flick you’d buy the drama without the backstory so props to Coogler for finding his own voice with a film that’s not just a franchise reboot or by the numbers homage.

In regards to the original Rocky production back in 1976, Stallone famously stuck to his guns and held out to play the lead in the script he had written that would go on to earn an Oscar nomination. Decades later it’s as if the man and the myth have become one. The ‘everybody loves to root for the underdog’ formula will never get old. A bit like rocking out and doing air guitar in your living room, you’d wager that many Rocky fans have caught themselves shadow boxing as that famous theme tune kicks in. And so if this is to be the last time we climb those iconic Philadephia steps with the Italian Stallion it’s a fitting send off and a moving final round for Stallone’s most enduring creation.

Michael B. Jordan & Will Smith to team up on ‘I Am Legend’ follow-up

Trailer arrives for Denzel Washington’s ‘A Journal for Jordan’