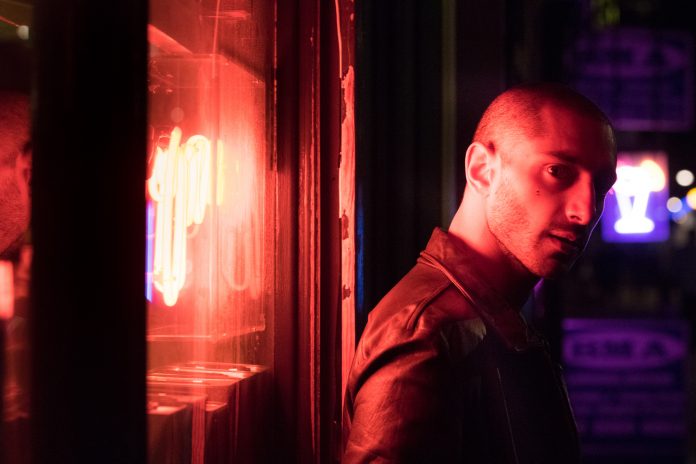 When looking at the London skyline at night, there are few ways better to describe the capital than a city of tiny lights. Whether that be through windows in houses, street lights or those used to decorate the most famous of landmarks – each light does appear to tell it’s own story, each belonging to somebody. Well in the case of Pete Travis’s latest cinematic endeavour – and first since Dredd – it’s the tale of Tommy Akhtar.

Riz Ahmed takes on the aforementioned role, a self-employed private eye who is tasked with uncovering the whereabouts of a Russian prostitute who has recently gone missing, with colleague Melody (Cush Jumbo) funding the investigation. The murky set of events – which includes the dead body of the client found in the hotel room the prostitute was last seen in – leads Tommy back to an old school friend he nicknamed Lovely (James Floyd) – a name that is hardly befitting of the shady businessman nowadays. This unlocks a host of memories for the pair, taking them back to a fateful night in their adolescence also concerning Shelley (Billie Piper) who also reappears and comes back onto the scene, as Tommy’s own life and the uncomfortable truths that go with it are explored, all while he seeks to get behind the corruption of the case he’s been assigned to.

This neo-noir borrows affectionately from classic film noir productions, not just in the presentation, but in the narrative, with a protagonist who has his own little office as a private eye. Though while Jack Nicholson had his own area in Chinatown, or the one adorned by Humphrey Bogart in The Maltese Falcon, Tommy’s is a small, grotty room above a flat in West London, contemporary and modernised with a minimum contrivance, as a recognisable trope of the genre at hand, and one utilised well in this instance.

The aesthetic of the film is engaging too, very darkly lit, mostly using natural light to set the scene, to light up the character’s faces, as so much of this film seems to be taking place in the shadows, which is emblematic of the story’s backstreet setting, behind our backs as we sleep at night. The visual experience is an indelible one, which had been expected from the director who brought us Dredd – a film criminally devoid of a sequel. There are similarities to the recent cat and mouse thriller Welcome to the Punch in that regard, yet this feels somewhat less stylised and more heavily placed in the real world, a London we recognise.

For that is the film’s greatest strength, the way it uses the city in such a remarkable, unique way. Though ineffably cinematic, here’s a film that offers an authentic depiction of London, without any swopping shots of the London Eye, no taking a left turn out of Oxford Circus and finding yourself stood outside Big Ben – nope, here’s a film that doesn’t have the British tourist board in mind (or the US box office for that matter) – and the film is all the better for it.