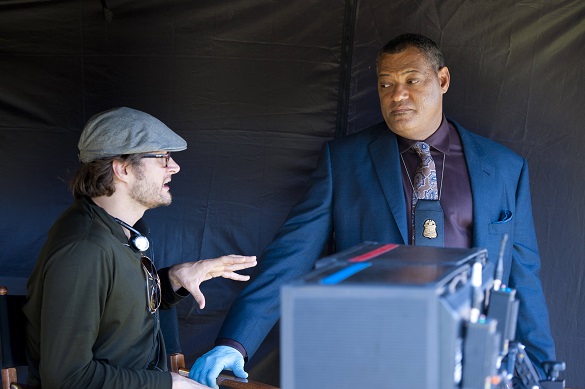 To date, Hannibal the TV series has lived up to increasing expectations and we are now eagerly awaiting season three. The man responsible for bringing the series to life and, indeed, to the small screen, Bryan Fuller, has ‘Fannibals’ and the entire ‘Fulliverse’ eating out of the palm of his hand, figuratively speaking.

We speak to the man himself, in what is the first of a two part interview, where we discuss the new season of Hannibal and more.

No fava beans were harmed in the making of this interview…

Last time we spoke you said you wanted to shoot Hannibal somewhere warm. Looks like you got your wish for season three…

[laughs] It was a noble effort.

We still shot in Canada for all but five days but having those five days of exteriors in Florence was such a great gift. The first half of the season is such a departure of what we’ve done in the first two seasons.

It really was a breath of fresh air getting away from the crime procedural aspect of the story of investigations with the FBI which I’ve always bristled against. It is so ubiquitous on television where everyone and their dog are doing a crime procedural show.

It is hard to make that world unique because of the proliferation of shows covering that territory. It was a great creative relief to leave that behind and tell a story that is predominantly, if not solely, character driven.

Being able to weed in an influx of new characters into the world as well as radically change the characters we have established, in such a way that it feels like a different show. That, I found, to be very creatively fulfilling.

What was it like to take the show to Italy given its significance to the books?

One of the stipulations I had to return to a season three was to be able to that. I didn’t want to return to it if we couldn’t tell the Italian story. So that was one of the conditions of me doing season three that we absolutely must embrace that aspect of the book.

Also it allowed us to continue to tell the story of the Vergers, who we set up at the end of season two and fans of the novel and the brilliant Ridley Scott film are familiar with it.

Speaking of which, Joe Anderson has now taken over the role of Mason Verger from Michael Pitt.

Yes, we cast Joe Anderson who I adore and think he brings his own brand of crazy to the character and absolutely makes him his own.

What was fascinating when I first started talking to him about the character is that he was familiar with the show but his reps didn’t tell him who the character was that we wanted him to play. We were talking and he started watching the episodes and was very complimentary of the world we were crafting.

He was so enthusiastic and excited about stepping into those shoes and it was a natural place to shift gear with an actor because of the disfigurement. So really a lot of Joe is buried scarred prosthetics but he does so much with his eyes and the pieces of him that are visible.

The transition is not necessarily seamless because his performance is different to that of Michael Pitts’ and that was one of the things important to me out of respect for Joe and his craft.

I think he pulls more from Gary Oldman than what Michael Pitt did in the second season, which was brilliant, but whenever you are working with actors you want the actor to make the best choices for them as a performer rather than walking them into a prefigured role.

A lot of fans liked the bro-mance, albeit a very strange one, between Will and Hannibal. Is that now well and truly over?

I would not say that…

I think there’s an interesting ark for Will Graham in this season where Hannibal has did horrible things to him but he has also been the best friend he has ever had – that is a lot to reconcile. So when Will says he forgives Hannibal he is genuinely forgiving him for his trespasses.

He accepts that Hannibal is a shark and you cannot fault a shark for being a shark. On that level he understands and forgives but that does not necessarily mean they are going to move on hand-in-hand into the sunset.

There is still a resolution that both of these characters are seeking for their own piece of mind. The first season was the bro-mance, the second was the break-up and now there’s the awkward reconciliation of how do we coexist or un-coexist.

It is now clear where Gillian Andersons’ character, Bedelia, loyalties lie but she still seems to be morally ambiguous…

Yes, absolutely. She’s no dummy in that regard, she knows who she’s dealing with. Bedelia is trying to navigate him in a way that we will see that proves she is just as smart as Hannibal – just as conniving and self-reliant.

It was very important for me to tell the tale not of a pathetic woman who has fallen in love with a serial killer because she believes she can change him. That would dishonour both the character and the actress.

That’s not how Gillian has been playing Bedelia. What we’ve had to do is extrapolate from everything we’ve experienced from Bedelia and Hannibal to then find a way legitimately and authentically that she could go on this trip with him.

Essentially it’s because she is his psychiatrist and she will always be first and foremost in any other aspect of their relationship. She just happens to be treating a man who is on the loose but is being very careful to make sure that she survives the therapy as well.

There have been some insane props so far with various dismembered bodies. Have you taken any for your house?

Yes [laughs]. I actually have a limbless Eddie Izzard sitting in my garage and I am sure he’ll find that very disturbing.

You’re a big sci-fi guy but do you collect any memorabilia?

It was the hand of death from the Monty Python Meaning of Life pointing at the Salmon mouse. I tried to get it and bid high on it but of course got swept up in production. When I checked on it I lost and was like, fuck!

I desperately wanted that piece so whoever is reading this and has that piece give me a call and we’ll make a deal.

In the past you’ve spoken about working on projects that were unfortunately cancelled. Have you mapped out for future seasons of Hannibal?

Well, I am absolutely prepared for the eventuality of a possible season four and prepared to end it at season three.

At the end of every season, I very consciously paint ourselves into a corner with the idea of how to unpaint us out. I painted us into a very particular corner for season three that allows season four to be a huge creative shift in the show that actually does something so completely different than what we’ve been doing in the past three years that is exciting creatively.

When I told Hugh and Mads what I planning for season four they were giddy.

Gillian Anderson features in trailer for season 2 of ‘The Great’