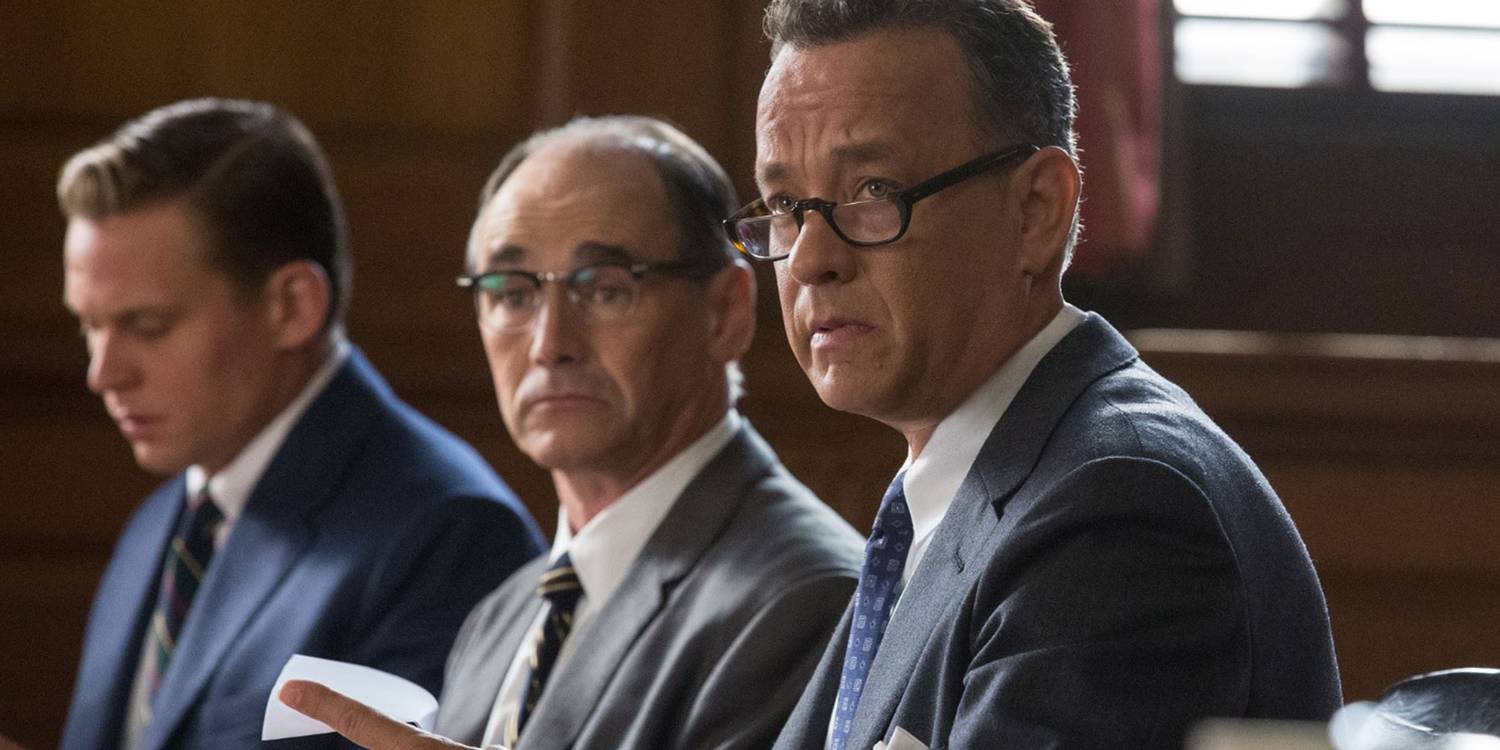 Having profoundly, and studiously explored the Second World War in Schindler’s List, venerable filmmaker Steven Spielberg has now turned his attentions to the tensions, and ramifications that transpired, in the Cold War, espionage thriller Bridge of Spies. Yet unlike the aforementioned, devastating drama, which picked up seven Academy Awards, this latest turn is rather unlikely to win any at all.

Our film opens with the seemingly subdued, self-effacing Rudolf Abel (Mark Rylance) as he is fervently pursed on the Subway by a group of federal agents. He’s a spy for the Soviet Union, and is en route to a location where he will recover a secret code, hidden within a coin, stuck underneath a park bench. Eventually he is captured and taken in to custody, to be given a public trial, with a lingering, almost inevitable outcome; the death penalty. The man tasked with preventing that, and ensuring that the spy is given a fair shot – is insurance lawyer, and devoted father, James B. Donovan (Tom Hanks).

Though fully aware of the fact his client is unlikely to avoid prosecution, noticing that this entire case is mostly for show, Donovan is insistent that Abel is imprisoned rather than executed – and it’s for good reason too, because when US citizens Frederic Pryor (Will Rogers) and Francis Gary Powers (Austin Stowell) are imprisoned abroad, the government realise Abel is a highly valuable bargaining tool, and so send Donovan over to Berlin to undertake a threatening series of negotiations that will ensure the safety of the prisoners – on both sides.

There can be no denying the accomplished direction to this archetypal thriller, as a fascinating tale left in the hands of one of the great, virtuoso storytellers. Though similarly to Lincoln, or War Horse – you can appreciate the dexterous, efficiency of the endeavour without fully immersing yourself within it, or having felt as thought you’ve been emotionally enriched from the experience. Though on the surface this appears to be an intimate character study, it remains frustratingly disengaging thanks to a convoluted narrative, with a myriad of themes at play that disallow the chance to truly feel invested in any one area. The complexity becomes somewhat suffocating, and tedium unwittingly kicks in as we approach the latter stages.

Needless to say the visual experience is an indelible one, with a bleak, grey aesthetic that captures the mood of the piece and era at hand. The cold, concrete Berlin setting makes for an unforgiving second act, while the opening half revels in a romanticised, Hollywood feel, with the 50’s cars, the umbrellas, the heavy rain – it’s stylistic, in a way that bears a resemblance to the likes of Road to Perdition – which had also starred Hanks in the lead role. The actor doesn’t disappoint in this feature either, managing to find a steady, working balance between being a hard-nosed, bullish lawyer, and a personable family man – as an actor who has made a career from illuminating the screen while remaining so distinctively normal at the same time – a remarkable ability.

Perhaps it’s unfair to place such high expectations on any film, but when Spielberg is at the helm, Hanks is in the lead, and screenwriting duties have been bestowed upon the sharp, witty Coen brothers (alongside newcomer Matt Charman) – the standard is so high that anything other than sheer brilliance is somewhat underwhelming, and regrettably it’s that very sentiment which feels most paramount upon leaving the cinema after this entertaining, if forgettable piece of cinema.

Henry Thomas looks back on E.T. forty years later, its emotional resonance with viewers – and that iconic audition