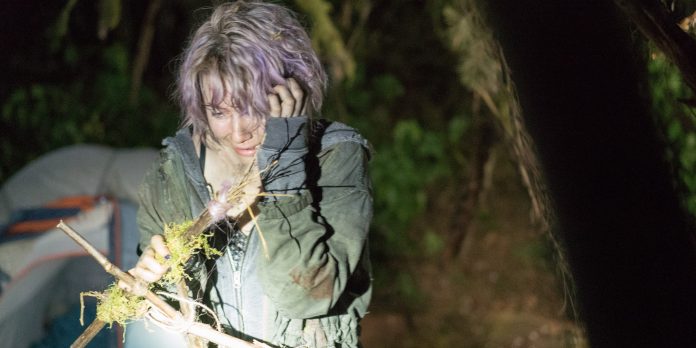 The closing shot to Eduardo Sanchez’s seminal horror flick The Blair Witch Project, featured the iconic image of a man facing the wall. It’s terrifying as we have absolutely no idea what compelled him to do this, what horrors the eponymous antagonist must pose if she has that power over an individual. It’s an elusive moment that is emblematic of a film that thrives in the notion of subtlety, revelling in what we don’t see, as opposed to what we do. This sequel, helmed by the immensely talented Adam Wingard, attempts to show us far too much, treading clumsily over the hallowed turf of the original, deciphering moments, such as the one above, that are far scarier without explanation.

The original tapes featured three individuals who all went missing, and one of which, Heather, left behind a younger brother in James (James Allen McCune), and now, just over 15 years on, he’s setting back off into the unforgiving, demonic woods that his sibling never returned from. Alongside his dear friend Lisa (Callie Hernandez), who intends on shooting their experiences for a documentary project she’s working on, and Peter (Brandon Scott) and Ashley (Corbin Reid), the quartet are encouraged by footage discovered which James believes could be his sister, so they track down the local who unearthed it, Lane (Wes Robinson) and his girlfriend Talia (Valorie Curry). The six head off into the woods to try and get to the bottom of the nefarious events that unravel within this location, though don’t quite expect they too could find themselves victims of the same dark forces.

It’s interesting to delve into this particular world with a new-founded means of technology for the protagonists to play with, as they set off equipped with a drone and GPS cameras. Things that, on paper, should make their deviation into the woods a far less vulnerable, precarious one. But horror movies aren’t played out on paper. This is partly what helps to justify this sequel, which feels completely vindicated, with a real place in this particular franchise and timeline. Plus, one of the big issues with found footage cinema, of which the original was an innovator, is that you often can’t justify why the characters would be filming in certain situations, and for a sub-genre that is subscribing to the notion, and is overtly steeped in realism, it can cause a real distance for the viewer and be detrimental to their investment. Yet that is never an issue here, and much like the original, you understand why it’s being filmed (for a documentary) and given all the characters have cameras attached to their ears – which must be kept powered on so their GPS is working, it helps us comprehend why everything is being captured.

The film shares another thing in common with the original – which is to almost set the narrative up like a collective of vignettes, each interrupted by daylight. Bad things only happen at night, so you have breathers when it’s light, and when the sun begins to set you get the dreaded butterflies, you know it’s coming, and then you have to, much like the protagonists, get through the night, craving, desperately, the rise of the sun. Though the difference with this particular endeavour, is that there’s no saying as to whether the morning will ever arrive.

So while not quite in the same league, and struggling from a distinctive lack of subtlety, not leaving anywhere near enough to the imagination as you may have hoped it to, all criticisms derive only when compared to what came before, when analysing this feature on the terms the franchise has set. But as a standalone production there is little to be underwhelmed with, as Blair Witch undoubtedly passes the scare test, as for any apprehensions that may exist, what isn’t in question is the sheer consistency of the scares. You have been warned.