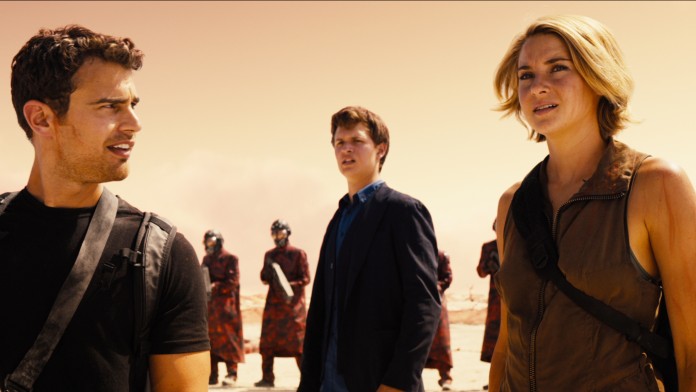 Within the opening two minute sequence to Allegiant – the third entry into the popular Divergent series, spawned from the mind of author Veronica Roth – we meet all of the characters from the preceding endeavours, like a contrived franchise best of. This merely sets the precedence, and is indicative of a film tirelessly vying to appease the target audience, compromising any sense of artistic credibility in the process.

Two of the characters we stumble across are Tris (Shailene Woodley) and Four (Theo James), with the evening sun glowing behind them, they ponder over the precarious future in Chicago. The factions may have ceased to exist – as has Kate Winslet’s Jeanine – but now Evelyn (Naomi Watts) is helming the new regime, and she bears more similarities to the aforementioned tyrant that she would have you believe. Avoiding the forthcoming war – Tris and Four escape, alongside Christina (Zoe Kravitz), Peter (Miles Teller) and Tris’ brother, Caleb (Ansel Elgort).

The fugitives don’t get very far however, eventually taken in by the Bureau of Genetic Welfare – who transport them to a supposedly safe environment, led by the composed David (Jeff Daniels), who informs Tris that she is completely pure, and a vital component in securing the future of mankind and restoring peace to the planet. While she wants nothing more than to assist in that regard, the collective grow increasingly more suspicious of their new friends.

From a narrative perspective, Allegiant has the potential to be the most engaging entry into the franchise yet, as a scrutinising, conspiratorial examination of society and politics, studying the gulf between those in power, and the susceptible, powerless members of the general public. The film survives off its distinctive elusive nature, as you embody the protagonists and never know who you can and can’t trust – caught somewhere in between, unable to feel at ease with those back in Chicago, nor with those offering a new life away from it.

But Robert Schwentke is the master of his own demise, presenting this tale in an all too stony-faced fashion, as a picture that takes itself far so seriously. There are moments where light relief is welcomed, but are gloriously ignored. Yet for a film so dour and earnest, the villains are simply not menacing enough, perhaps not helped by the fact we refer to them by just their first names. Evelyn and David sounds more like a hippie pop duo in the 60s than potential villains in a dystopian, blockbuster franchise. The set design fails to rouse the viewer either, and while very distinctive to this particular world, the modern architecture doesn’t feel real in any way, nor do the desolate landscapes reminiscent of Mars.

The talented group of actors are not given enough to do either, Woodley in particular underused, despite being the leading role. While she pensively looks into the distance, Teller is left with all of the seemingly witty one-liners, with no organic naturalism to their dialogue, everything so frustratingly stilted. On the other hand, Theo James must be commended – for having exactly the same length stubble across three movies now. Quite the talent.