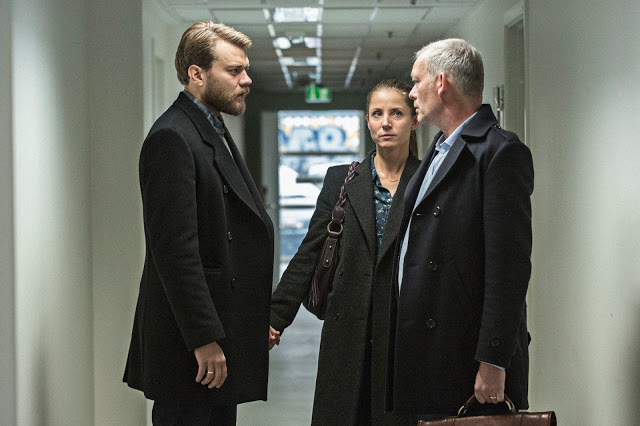 It has come as little surprise to see Tobias Lindholm’s A War long-listed for an Academy Award, presented as Denmark’s entry for the annual ceremony. The film, which bears a similarity to Kubrick’s Paths of Glory (which is never a bad thing) marks the talented filmmaker’s third endeavour in the director’s chair, and his third collaboration with lead star, Pilou Asbæk, following on from R and A Hijacking.

Speaking to HeyUGuys alongside fellow co-star Tuva Novotny, Asbæk admitted he signed up to the project before even reading the screenplay. “The last two films we’ve done together, he called me and asked if I want to be a part of it, and I say yes first, and then he starts writing,” he continued, “I would be an absolute idiot not to say yes to work with Tobias, because he’s one of those guys who gives you characters you can portray. They’re complicated, they aren’t black and white, they’re human beings.”

Novotny was quick to jump in on the praise for Lindholm, too. “He gives us great freedom and responsibility. But at the same time he has a finely crafted framework to allow us to fulfil his demands.”

A War centres around a commander (Asbæk) stationed in Afghanistan, who finds his men caught up in a crossfire, where his next move is eventually scrutinised, and brings about grave consequences, as he is taken to court for his actions, all the while his wife (Novotny) is left with the burden of bringing up their two children alone. Where this film shines, is within the blurring of the line between right and wrong – as the audience’s perceptions are tampered with, as we struggle to figure out exactly what we’re rooting for.

“Tobias told me he wanted to make a film where you cheer for the guy for one hour, and then rest of the film you feel bad for cheering him – but make it possible, and understandable,” Asbæk said. “We’ve had so many screenings now and so many reactions, and some people are very offended, some people don’t give a shit, but in Venice, at the world première, I thought it would be trouble – this is going to be political. But 300 Italians cheered – so the moral compass in that room was fucked up.”

“That is Tobias’ ambition; to put us in the ambivalence of the main character,” Novotny added. “It puts the audience in a place where we’re not sure what to think, and that’s great, for a film to lead us to that place of debate rather than conclusion. Is it wrong or right? That’s the brilliance of his work. He puts us in a place where we need to discuss it.”

Often when you speak to an actor who has portrayed a soldier in a movie, they find from embodying the character at hand, they discover a newfound respect and admiration for those who serve for their country, and for Asbæk, that was most definitely the case.

“There’s a reason why I became an actor and not a soldier, because I have some points of view that are not correct with a soldier’s point of view, but then I met these guys and I understood them, and why they choose what they choose in life,” he said. “Suddenly they become friends, and it’s not often you do a film and it becomes personal, it is a job – we do three films a year and you meet a lot of people. But somehow these guys got under my skin, and we still text, drink beer and talk about it.”

“For them, this has been an amazing experience, to have something that they’ve spent 15 years on, to be able to show their family. And now, the family also has a tool to say to their husbands, this is how I felt being home with the kids. The strongest reaction hasn’t been from soldiers, it has been from soldier’s wives. I didn’t expect that.”

It’s been a huge year for Asbæk, as his big screen career continues to flourish, particularly in how he has expanded into English language productions, gaining roles in the likes of Woodshock, Ghost in the Shell and the Ben-Hur remake – but most notably is his move into television, as he is set to grace our screens in the forthcoming Game of Thrones series. Sadly, however, he’s not allowed to say an awful amount about it.

“I can’t say anything. I can say he is Euron Greyjoy,” he laughed. “It wasn’t even supposed to be published, the only reason it came out was because some guy took a picture when I was doing a scene.”

“It would have been awesome for me had it been a surprise, because then I wouldn’t have to give the worst answer in the world; ‘no comment’. It’s so boring, especially as I’ve had such a great experience shooting and I want to share it with the world, but that’s not possible until May. But I can tell you one thing, the production is awesome. There’s a reason why it’s the biggest show in the world, because they are the sweetest people in the world. It was cool, man.”

Before Games of Thrones takes over our lives (again), we have the award’s season to get through, and given the profundity to A War, and the remarkable acting abilities on show, and the meticulous, if freeing directing by Lindholm – there’s a good chance this movie is in with a shout at the Oscars – and Novotny tells us that is can only bring good things to the film.

“It’s a great deal, just to be mentioned in that arena, it means a lot to the distributional aspects and it’s huge for all of us. It’s great for the film,” before Asbæk added, “We’re actors and it’s a party that celebrates movies, mainly American films, but films. What’s not to like? Plus, people look good in tuxedos.”

A War is released on January 8th. You can read our review here.